Event sought to raise awareness of the importance of energy transition.

On September 11th, ICLEI South America, with the support of its World Secretariat, officially started the project 100% Renewables Cities and Regions Roadmap in Argentina. The initiative is being implemented by ICLEI SAMS, in the cities of Avellaneda (Santa Fé province), Rosario and La Plata. The event was held online to present the project and aimed at raising awareness from political organizations of the importance of renewable energy for a green energy transition.

Rodrigo Perpétuo, executive secretary of ICLEI South America, highlighted that a very assertive and strategic way to start rethinking the sustainability of cities is through renewable energies. “A fundamental baseline has been created so that the municipalities are able to efficiently manage the energy consumption and supply. We will, thus, seek to scale the implementation of this project. The challenge is to reach COP26, in the United Kingdom, with more concrete results and to present Argentina as an international role model to be followed”, commented Perpétuo.

Ulrich Sante, Germany ambassador to Argentina, believes that, through cooperation between the two countries, the project could contribute to energy efficiency and development of renewable energies in that country. “Argentina has enormous potential to move in this direction, due to its natural resources and its geographical extension, making it an ideal and strategic partner for this modernization.”

For Maria Julia Reyna, director of the ICLEI office in Argentina, the project’s road ahead enables the achievement of many relevant and strategic objectives in all cooperation levels. “Determining lines of evidence is often complex, but we are quite pleased with what we are achieving.” These ambitious objectives are also related to national targets for renewable energy implementation. According to Gabriela Rijter, from the National Directorate of Electricity Generation, the goal is to increase the share of renewable energy in the national energy mix, reaching out to 16% by 2021 and 20% by 2025.

For Celia Garcia-Baños, Associate Programme Officer at IRENA, an intergovernmental agency partner in the project implementation, it is essential to coordinate all involved authorities and to develop capacities for the implementation of policies at the municipal, regional and national levels. “It is necessary to act not only in the electric energy generation and consumption sector, but also in the transport and construction sectors”.

Dionísio Scarpin, mayor of Avellanada (selected as Deep-dive City for the project implementation), closed the meeting with a recommendation that the community should also adopt more responsible energy consumption behavior. “Thus, we will be able to achieve the international objectives that we are looking for”, in accordance with his evaluation.

Next steps will be shared during multilevel governance dialogues and the National Advisory Group will be formalised by means of a Commitment Act.

About “100% Renewables Cities and Regions Roadmap”:

The “100% 100% Renewables Cities and Regions Roadmap is a project implemented by ICLEI – Local Governments for Sustainability and funded by the German Federal Ministry of Environment, Nature Conservation and Nuclear Safety (BMU) through the International Climate Initiative (IKI).By working with local and regional governments from Argentina, Indonesia and Kenya, the project will foster multilevel governance, and put that collaboration at the heart of the sustainable energy transition 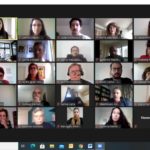 Gabriela Rijter, from the National Directorate of Electricity Generatio