The series of meetings also aimed to identify the challenges and opportunities of renewable energy (RE) development, and to invite these stakeholders to engage in the program. Under the 100% Renewables Cities and Regions Roadmap (100% RE) project, ICLEI will provide both technical and non-technical support to assist local governments in conducting tangible strategies such as RE potential mapping, energy modeling, capacity building, and bankable project proposal development to promote renewable energy in WNT.

Additionally, the State Electricity Company (PLN) has an authority to develop a 10-year electricity business plan (RUPTL) within their operation areas and this should be aligned with other plans as well. Based on the RUPTL 2019-2028, PLN is planning to expand the steam power plants capacity in WNT by 534 MW. .

Mr. Surya Darma and Mr. Paul Butarbutar, the Chairman and the Executive Director of METI respectively, also provided insight regarding the energy modelling process that will be conducted by ICLEI Indonesia  and Fraunhofer ISE. He said that ICLEI Indonesia  has to identify the social and technical issues of RE development especially in WNT.  The modelling must consider the demand, grid condition, and proven potential of renewable energy in the region.

To achieve the target of 23% renewable energy by 2025, Indonesia needs to access investments and financial modalities.“The state government does not have much capability to allocate this huge amount of funding, meaning that investor involvement is necessary” said Mr. Sugeng Mujiyanto on behalf of DEN. 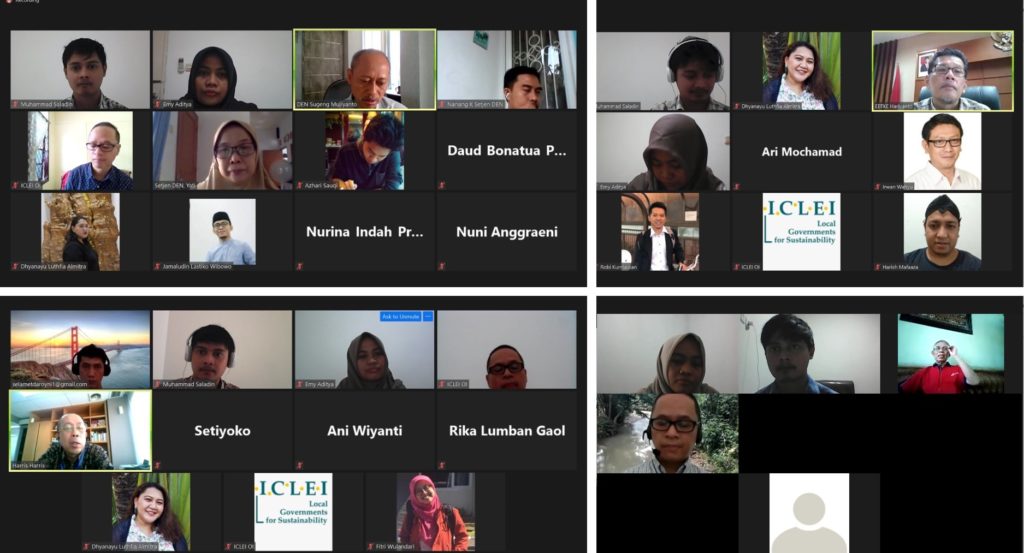 The discussion between 100% RE ICLEI Indonesia with National Stakeholders held virtually during Covid-19 situations.

On the other hand, stakeholders in the national level are expected to be able to help in ensuring regulatory frameworks and policies that support the climate for renewable energy investment. KESDM is currently planning and formulating the draft of Presidential Regulation (Perpres) related to New and Renewable Energy. According to Mr. Harris Yahya, Director of Various New and Renewable Energy, the purpose of this Perpres is to ensure that the price of RE is affordable.

At the end of the discussion, these stakeholders expressed their support for the program “At the first time, I think the 100% RE is quite ambitious. However, this target is possible though the challenges must be overcome together”, said Mr. Nanang representatives of DEN.